Readers of the books and watchers of the series, fear not. This post contains no spoilers.

I came to George R. R. Martin’s work through the superb HBO series (in my very humble opinion). I thought it was brilliant, just brilliant. I finished the first two seasons in a fortnight, by which time the third season was launching. And I’d been up-to-date with the TV telling of Martin’s tale ever since.

A few months after finishing the third season, I came into an invaluable resource: time. That’s why I decided to buy the ‘complete’ set of Martin’s pentalogy. (I had to look that one up.)

For once, I made the smart decision to buy the Kindle version (no commission there). I’m a conservative reader – conservative in the sense that I staunchly believe in the magic of the written word on paper. I don’t think e-readers will ever replace the book, as I believe (well, hope) there are others who share my love of flicking the page to see what comes next. Reading is a very romantic thing, I find. And I’m a romantic person.

Also, it’s cooler to sit with a book in a café than to sit staring at your phone. People think you’re an intellectual rather than a social media addict. Not that you can’t be both, of course.

So yes, for the past three months I’ve been swiping through page, after page, after page of A Song of Ice and Fire. I’m now onto Book 4 Part 1. I’ve long surpassed the series. And – and this is the hard bit – I know so much more, so much more than 90% of my friends who watch the series with passion, but opted not to read the books.

And, you know, it’s that sort of book where the stories are so intricately linked that there’s no such thing as a spoiler. One spoiler contains a hundred thousand others. One leads to another. So much so that often – depending on who I’m talking to and how far they’ve got in the series – I cannot contribute a single comment that doesn’t risk telling all and spoiling it for them.

So, yes. That’s my frustration. I wanted to let it out. Before I go back to the story of that guy in the white cloak who’s not Jaime. (Sorry, I couldn’t resist. It’s not that big of a spoiler, really. You probably don’t know who I’m talking about. Or maybe you do. You’ve probably seen (read) him walking about. Hmm…)

I don’t like verbal violence. But may the Old Gods and the New condemn you to live the rest of your life in the Sky Cell if you leave spoilers in the comments area. Sincerest apologies.

Oh, and in case you were wondering, I’m #teamTyrion. And I’d like to live in Dorne.

And you might have seen this on the Net. If not, feast your eyes. #Colbert2016 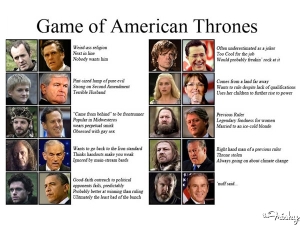 8 thoughts on “A Song of Ice and Fire”

Leave a Reply to parn_val x