All we’ve done is show the world that democracy isn’t chaos. That there is a great, invisible strength in a people’s union. Say we’ve shown that a people can endure awful sacrifice and yet cohere. Mightn’t that save at least the idea of democracy to aspire to? Eventually to become worthy of? 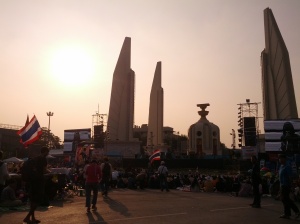 Flags swaying in the setting sun at Thailand’s Democracy Monument

One thought on “On Democracy”