Under construction. All things come, in good time.

Quite a rare find, this one. 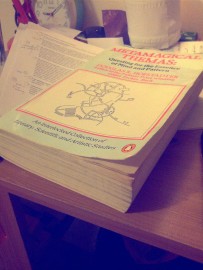 I dug up a picture of my own copy. Second-hand, as the tattered condition suggests.

Here’s the first one: the one and only Metamagical Themas by Douglas R. Hofstadter. The most peculiar and wonderful piece(s) of writing I’ve ever read. Takes a genius to write. Doesn’t take a genius to read. Warning: not suitable for those with limited interest in seemingly nonsensical things.

The second one would be Margaret Mitchell’s Gone with the Wind. Unfortunately, I watched the movie before I read the book. But even then, the intensity of the story prevailed through the written word. It’s one of the books that succeeded in investing me emotionally so very completely in the main characters’ trajectories. So much so that I cried inside. I won’t tell you where in the book, because that would be spoiling it!

The movie was also pretty good. Though I have to say I liked the book marginally more than the movie. Sorry Clark.

Oh, and before I forget, this listing is in no particular order. The books that appear here are by default my most prized possessions, and I wouldn’t want to rank them. If you let me know what you’d like to read – as in what you’re looking to get from the book – though, I’d be able to recommend you a book that would best suit your wishes.

Me reading Catch-22 in London.

Me reading Catch-22 in Paris.

The third, and happens to be the most recently discovered, book is Joseph Heller’s Catch-22. Typical? Yes. I know. I love this book. I love it to bits. I think it’s the smartest book I’ve ever come across. By far. By light years. (Which is a measure of distance, as my scientist friends like to remind me every time I make the mistake of saying otherwise.)

I also happen not to have finished it. I know. Shame on me. I love it so much I’ve put it here without knowing how it ends. Because no matter how it ends, it will have been brilliant. I would have put it here after reading the first two chapters. To hell I would have. But the thought of writing a blog hadn’t even crossed my mind at that point in time. Girl got enlightened late. 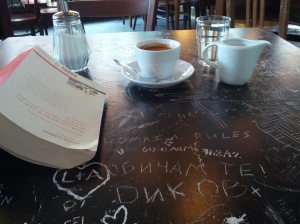 Me reading Catch-22 in Berlin.

A word of warning to those thinking of purchasing this book to read: it’s damn hard (ok, four words). Reading this book requires all the cells of my puny brain (which happens to have lots of folds – as I’d like to think and boast to my anonymous readers) to be activated to the max. All those sub-stories. Timeline clashes. Fast-forwards and rewinds. But I love it. I. Just. Love. It. Oh the sarcasm. I’m not a fan of big words. (I’m a big fan of sarcasm.) But if ever I had to choose a book to illustrate ‘clairvoyance’ in an illustrated dictionary. This would be it. Have I convinced you to read it? I hope I have. But if you haven’t fallen in love with the book after reading the first two chapters, do stop. You won’t love the rest of it. And I once made the mistake of trying to plough through a book I didn’t like, and ended up torturing myself for weeks on end. (Jack Kerouac’s On the Road – a brilliant piece of writing, don’t get me wrong. I just don’t get it.)

I believe this is the original French version. But I’m not sure. It doesn’t matter anyways. Does it?

The fourth book takes us into the realms of post-modernism. Before you stop reading, I have no idea what post-modernist writing is supposed to be like. I’m not well read on the matter. (Do feel free to enlighten me via comments or inbox. I like learning.) This book has been labelled as a “po-mo” book, which I think is a shame as many potential readers would be scared/shied/offput away by the label. So, here it is: HHhH by Laurent Binet. Yes, it’s a “po-mo” book written in French by a first-time French author. Doesn’t sound promising? But it’s good. I read it in French and liked it immensely. I can’t speak for the translated version – I hope the translator did the author justice. They usually do. But if you read it in English and don’t like it, well, that’s too bad – serves you right for not learning (or paying attention to – depending on which country you were schooled in) French at school.

Before I get too carried away by my Francophile tendencies, HHhH is an acronym for ‘Himmlers Hirn heisst Heydrich’ – or, in English, Himmler’s brain is called Heydrich. It’s a book about a Nazi personality, and more specifically the events leading up to the successful assassination attempt on his life by a group of Czech freedom fighters. I want to convince you to read it. Because it’s brilliant. But actually, someone else has done the job for me. So do go onto the guardian website, where James Lasdun has written an informative review. It was in fact this very review that convinced me to read the book. Which did not disappoint. It rather exceeded all expectations.

The fifth book indulges my Economist leanings: Steve Keen’s Debunking Economics. If you studied Economics as an undergraduate and haven’t read this book, you should go read it now. This is essential reading list for any undergrad econ course. It’s a voice of clarity and reason amidst a sea of confusion and – more often than not – madness. 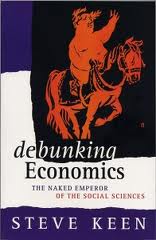 My copy. A newer, revised edition is, however, available.

Yes. As the name suggests, this is another book which tries to convince you that mainstream economics is defunct, that it’s predicated on unrealistic assumptions which should be rejected, and which is – therefore – useless if not outright dangerous. I read this book back in 2008, before I went to university. An Economics professor recommended it to me. I won’t say it’s an easy read. It’s not. But it’s not too hard even for the uninitiated in undergraduate economics. It’s a book written for the layman who’s curious and keen. Anyone (well, not anyone) would be able to read it.

If you have a book you think should be on this list, do let me know.